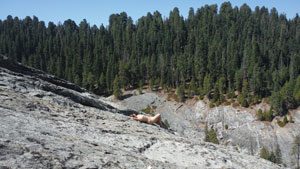 Photography has been one of my prime passions since I was old enough to read a light meter. No pixels when I started. I can still identify the pungent smell of developer and feel the excitement of watching the black and white image magically appearing on the the paper. 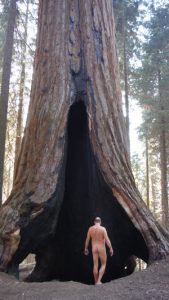 My favorite subject; the nude in nature. I was surprised at how many of my friends volunteered. Of course there was no internet to worry about spreading images over half the planet.

For years I filled the role of staff photographer on our smaller cruises and I got some nice shots – if I do say so myself. Some made their way into our brochures, the fact of which I was quite proud. Nudes go well with oceans and sand. It’s a natural environment in which to be nude.

But a forest? Not just any forest but California’s Giant Sequoias in the National Park of the same name? Photographer Jack Gescheidt was displaying some of his work in the Canadian Naturist magazine “Going Natural”. He named it The Tree Spirit Project and it is an amazing union of enormous trees playing host to the sensuous nude bodies of people blending into their roots, trunks, and branches. The photographs were not just photographs of nudes and trees. This was art. Nature’s largest living creatures and it’s most destructive, combined in an embrace of obvious love and awe.

My friend Petra, the editor of the Canadian Naturist Magazine, was planning on attending Jack’s next shoot among the sequoias of California in September and asked if I would like to come along. How could I say no. 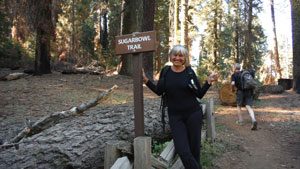 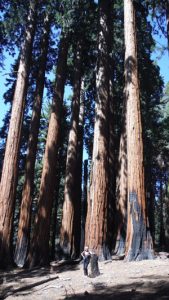 My first impression of the trees was “These are from another world.” I expected a T-Rex or perhaps Yoda to peak around one of the massive trunks. Even the air was different – cooler, cleaner, fresher. In places the road was surrounded by these giants, cutting out the sunlight. No Yoda or T-Rex but a black bear stopped traffic foraging for his winters fuel. 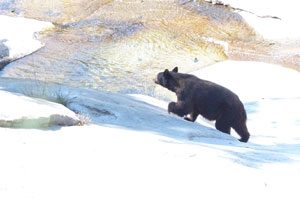 We arrived at the lodge where we would be staying about sundown, having squandered 2 hours at the Rent-A-Car desk in the San Francisco airport. No ordinary lodge, this. Privacy yet enormous sheets of glass open to the surrounding forest. I expected Boy Scout meals of hot dogs, hamburgers, and french fries. Instead we were served prime rib, snow crab legs, baked potatoes and a luscious tossed salad with all the trimmings.

We helped Jack unload his camera equipment and then off to bed. Some not so nice accommodations have mirrors on the ceiling. Ours had a glass ceiling and when the lights were out thousands of stars shone overhead through the branches of towering trees. I fell asleep attempting to count them.

We met at 8:00 AM in the restaurant. Jack the photographer, Amy his wife, Tom the computer guru, and Heidi and Dave who turns out to be a past Bare Necessities cruiser (Hawaii). Jack knows the forest. We drive about 45 minutes until we run out of road. We begin our hike, backpacks on and tripods in hand. Some of the trees looked the same which caused me and Heidi to question whether we had walked in a circle. A looming precipice proved that theory wrong and Jack took snapshots of Heidi and Petra much closer to the edge than I would ever feel comfortable. 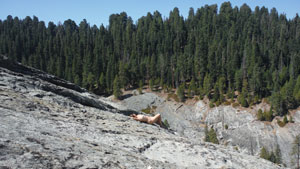 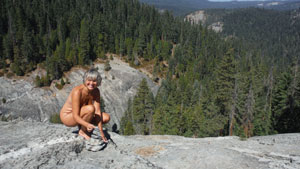 Another hours walk and we had reached our destination. A sequoia damaged by fire. Another photo op. 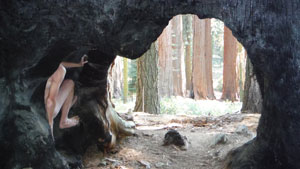 I was surprised to learn that sequoias can be damaged by fire but seldom destroyed by it. Hence the reason for sequoias 4,000 years old. 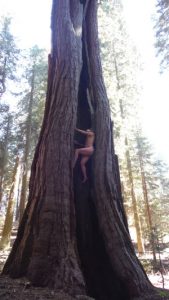 Jack shot until we had just enough time to make it back to the car by dark. he was meticulous in placing bodies and trees together. No guess work was involved. Much attention was paid to light. Many trees were passed by because the shadow placement just wasn’t right.

We made it back to the Lodge just in time to join the last of the line for salad, salmon, spaghetti and meat sauce washed down with lemon aid, ice tea, fruit drinks, hot tea and coffee. S’mores (graham cracker, chocolate, and marshmallow roasted on an open fire) was a popular dessert option.

The next two days were basically repeats of the first day. Drive, park, hike, shoot. Muscles were sore from hiking but no one complained. We all knew we were participating in something special, something important. We were merging the beauty of the human form with that of nature’s most majestic creations.

There is no doubt these sequoias have seen the human form before – perhaps 2 or 3 thousand years ago. Could they be surprised to see and feel the human form again? I like to thinks so.