It’s a bird, It’s a plane, No it’s a naked violin playing skydiver 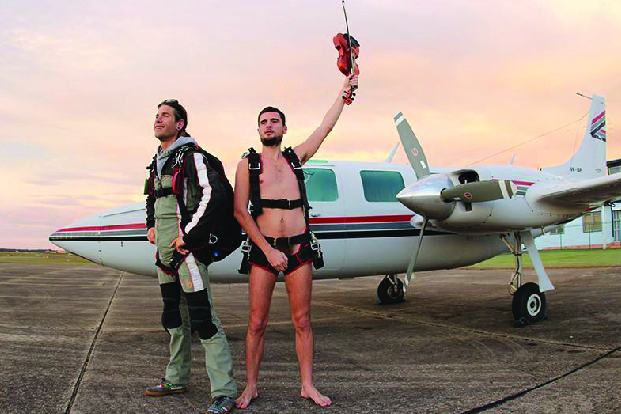 While it has become commonplace for people to raise money for different awareness campaigns for their birthdays, one London man truly made his recent “Birthday Dive Campaign” matter. Musician Glen Donnelly formerly with the London Symphony Orchestra has attracted worldwide attention for his naked skydiving birthday campaign to raise awareness for men’s body image issues and eating disorders. What many didn’t realize is the battle Donnelly has personally had with body image as he silently suffered for years.

Sadly, Donnelly even developed a condition called body dysmorphic disorder, which causes one to become overly preoccupied with imaginary physical defects, leading him to a breaking point where he was no longer able to play in the orchestra in 2013 in order to seek therapy. What he discovered during this time was that taking his clothes off was a radical way for him to learn how to accept himself, however, it was a successful way for him to heal.

Donnelly was eventually able to become healthy as a result of therapy and working with a psychiatrist, and has made it his goal to educate and help others suffering from the disorder. He has now started two charities and a Nude Movement, in addition to this Birthday Dive.

At Bare Necessities Tour & Travel, we feel nudist activities and cruising is truly the most freeing and healing experience for both mind and body. We strive to create a safe environment full of acceptance and positivity on all of our cruises. We hope you will join us on one of our cruises and see for yourself the positive effects it has on you.