A Report from Maureen — a First-Time Bare Cruiser

We finally decided to take our first cruise because we’re celebrating our 35th Wedding Anniversary and my 65th Birthday. We wanted it to be special and chose the 10-day Big Nude Boat cruise February 2 – 12, 2018 on the Carnival Victory roundtrip from Miami, Florida. We have gone from a 24 foot Sea Ray Boat to a 2700 passenger major cruise liner!
This cruise sponsored by Bare Necessities is advertised as totally nude with only two restrictions, the main dining room and entering and exiting all ports. Being our first cruise, we were flipped out worrying about the 2700 passengers boarding and departing the ship at the beginning and end of the cruise and all ports in-between. We were very impressed with how efficiently Carnival performed these tasks. Within an hour of leaving our port of departure, an announcement was made that it was “okay to strip” and 2700 passengers suddenly became 2700 naked passengers. 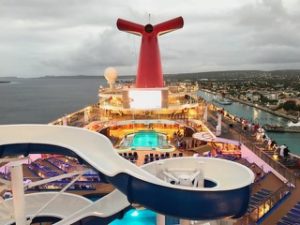 We loved the ship. The stateroom was beautiful and we kept the balcony door open at night to hear the swishing of the waves. A massive nightclub with Broadway-style shows and comedians, 4 times a night along with piano bars. These provided plenty of entertainment before entering the nude disco later at night. There were also several other rock bands (including a great band from Tampa called Tone Deaf Mary) and individual musical performers both on the pool deck, in the casino and in the lobby bars. During the day, the 3 outdoor pools were filled to capacity as all 2700 nudies were, of course into nude sunbathing each day. Rock and Western music blared from huge speakers and there was plenty of dancing, eating, and games to play. We found ourselves running from show to show and comedian to comedian to get everything in.
What was interesting was that every day, you received a little newspaper called the Fun Times that listed all of the activities of the day. This went along with a Carnival Interactive App that would also show you all activities of the day along with current weather, and your current charges on the ship. 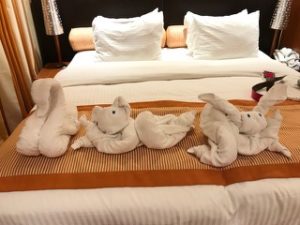 Each day there were television programs also detailing the activities of the day. Your key card was not only your charge card, but it was your room key, and along with your Picture ID, your gateway to leave and re-enter the boat. Each day, the maid left a creative animal designed with towels, that was loved by everyone.

What must be remembered is that this is a nude cruise thus all ports of call and private islands were tailored to nude activities. Islands, where normal textile cruise ships stop, are suddenly turned into nude islands for this ship. The only restriction is being dressed on the tender boats and being dressed upon arrival in the actual ports. Many excursions were nude for this cruise including sunset cruises, zip lining, and snorkeling.

Here are how the days went by:

Day 2: Half Moon Cay, Bahamas This is a private island in the Bahamas where many cruises stop. Our ship was the only one that day and it was open for nudity for the day. The beach was pristine. There were plenty of lounge chairs and a buffet lunch was served near the beach.

Day 3: A Fun Day At Sea This was Super Bowl Sunday. There were bare-gate parties all over the ship. This is definitely the way to celebrate the super bowl.

Day 4: Amber Cove, Dominican Republic Here we had scheduled a shore excursion. It was a 45-minute drive on a back, bumpy, dirt road to a beautiful secluded beach. We went zip-lining for our first time and probably our last time. It was frightening. Once we relaxed, it was exciting. Afterward, we had a typical Dominican lunch and then went to the beach. That day, this beach was just for our ship’s nudists.

Day 5: Fun Day At Sea The theme this day was Pirates of the Caribbean. There was a Bare-fest masquerade ball in the evening. My husband and I did not participate but it was amazing to see the costumes people wore.

Day 6: Curacao This stop was from 11 AM to 10:30 PM. We had scheduled a shore excursion which was a Nude sunset cruise. We did not have to leave on this until 400 PM. Since we had never been to this island we decided to walk around for a few hours. The sunset was beautiful and after leaving the harbor at a certain point we were able to undress. There were unlimited beverages and some snacks on this trip.

Day 7: Bonaire The shore excursion we booked for this island was a nude snorkel trip on a catamaran. Once we were about 45 minutes from the port, the Captain allowed us to become naked. If you have never done it, snorkeling nude is fabulous. Bonaire was the best for snorkeling.

Day 8: Aruba We had no shore excursions planned because we have been to this island once before. However, we had two sets of friends staying in the Palm Beach area next to each other in different hotels. We visited both. This day was also our friend Beth’s birthday. We celebrated with her and her husband later on our balcony with a bottle of champagne and saw another beautiful sunset as we sailed away. We had dinner together and watched a few shows.

Day 11: The ship arrived back in Miami. 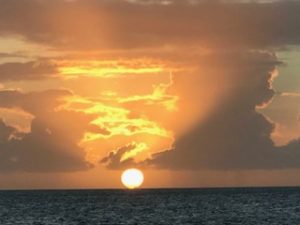 Before the end of the cruise we “re-upped” for next year’s cruise, on the newly refurbished Carnival Sunshine. Now, we have another year to look forward to another cruise in bare-adise!